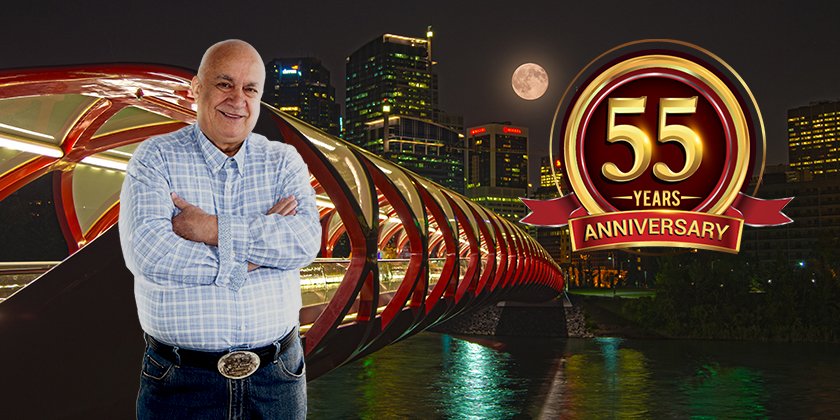 How the journey began

Fifty-five years in business – easy to say and hard to pull off. It all started one day in November 1966 when the young Vaccaro brothers, Alfredo and Nicola, Italian immigrants, began laying tiles in Calgary. A few months earlier, Alfredo was making ceramic tiles in a factory in Italy. He suddenly found himself crossing the Atlantic to meet his brother, adjust to a different culture, learn another language, and start a whole new life. It was probably the most crucial move in Alfredo’s life. What a way to go from tile manufacturing to tile installation!

Falling in love with Canada and witnessing the crude oil boom

Alfredo fell in love with Canada and the Canadian way of living and working. He saw the potential of the small town of Calgary. He witnessed the construction and completion of the Calgary Tower in 1968, which at 191 meters became America’s tallest observation tower when the tallest Calgary’s buildings barely reached 20 stories and less than 90 meters. Alfredo still refers to the Calgary Tower as the Husky Tower, which was its original name. With this iconic construction and other new buildings, the city began to look modern.

In the early 1970s, an unexpected international conflict in the Middle East sent the price of oil skyrocketing, and Alberta’s economy flourished. The oil industry attracted thousands of workers, and the construction and housing sectors were also booming. Alfredo was part of those historical moments when Calgary had more annual building permit revenue than New York or Chicago. He saw many opportunities to develop his career. With new constructions everywhere, the city was a laboratory, a school, where Alfredo refined the art of creating beautiful designs using ceramic tiles, porcelain slabs, and natural stones.

The booms and busts of the economy made him stronger

But in the early 1980s, the paradise that Alberta had become began to fade. A global economic recession, including a drastic drop in oil price, brutally hit the oil industry; and all other sectors of the economy fell like dominoes. The consequences were devastating: high unemployment, foreclosures, bankruptcies, exoduses and suicides.

Alfredo stayed in Calgary and overcame the challenges of losing most of his income. Fortunately, the economy began to recover in the late 1980s, and Alfredo continued to faithfully work for the company that gave him his first job. He began to understand that bad times don’t last forever and learned that being serene, persistent, and positive are valuable attributes.

The ups and downs of the economy have continued, and our province’s economy continues to depend heavily on the price of crude oil and government policies regarding the oil industry.

Since 1966 Alfredo has experienced booms and busts, but here is his home, and Calgary has continued to grow and become one of the best cities in the world to live in.

Alfredo establishes a new company to continue delighting his customers

Alfredo created his own company Alfredo Marble & Tile, in 2016, after fifty years of working with partners to continue providing the best products and customer service. Being a field manager or business partner had never stopped Alfredo from getting his hands dirty and personally solving customer needs. As the owner and director of his business, he has not stopped visiting each job site to monitor the work quality. He always talks to his clients; he is calm, friendly and warm-hearted.

For Alfredo, it has been fifty-five years of learning, growing, delighting customers, and making friends. Alfredo is an expert in natural stones and ceramic tiles, and he knows what Albertans expect of him. His kindness does not prevent him from being strict with his workers to guarantee their works’ quality and compliance with safety regulations. And the best thing is that:

Alfredo loves and enjoys his work.

Now we understand why the motto says: “Better call Alfredo.”